Posted by Michael Risch
It's time to start bringing in the lights! Wishing our readers a great new year. I'll be back with posts in the next couple weeks. 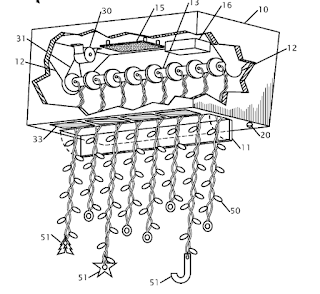 How Do We Know What's Government Speech? Ask the Listeners (with Daniel Hemel)

Posted by Lisa Larrimore Ouellette
Note: This post is co-authored with Daniel Hemel, an assistant professor of law at the University of Chicago Law School, and cross-posted at Whatever Source Derived. Follow him on Twitter: @DanielJHemel. This project may be of particular interest to the many Written Description readers who followed Matal v. Tam and its recent follow-up, In re Brunetti.

The distinction between private expression and government speech is fundamental to First Amendment jurisprudence. As the Supreme Court has held repeatedly, the government must be viewpoint-neutral when it regulates private expression, but not when it engages in speech of its own. For example, a public school cannot prohibit students from expressing anti-war views, but the government is free to propagate its own messages in support of a war effort without any need to simultaneously promote pacifism. Yet despite the doctrinal significance of the distinction between private expression and government speech, the line that separates these two categories is often quite fuzzy. A private billboard is clearly private expression, and the Lincoln Memorial is paradigmatic government speech, but what about a temporary privately donated exhibit in a state capitol? Privately produced visitors’ guides at a state highway rest area? A state university name and logo on a student group’s T-shirt? These are a few of the scenarios federal courts have wrestled with in recent cases.

To identify government speech in close cases, the Supreme Court has placed increasing emphasis on whether members of the public reasonably perceive the relevant expression to be private or government speech. As explained below, we think this turn toward public perception is a welcome development. But the Court has so far failed to develop a reliable method for determining how ordinary citizens distinguish between private and government messages.

In an article forthcoming in the Supreme Court Review, we begin to fill that empirical void. We presented a variety of speech scenarios to a nationally representative sample of more than 1200 respondents and asked the respondents to assess whether the speech in question was the government’s. Some of the speculative claims made by the justices in recent government speech cases are borne out by our survey: for example, we find that members of the public do routinely interpret monuments on government land as conveying a message on the government’s behalf. In other respects, however, the justices’ speculation proves less accurate: for instance, while the Court in Tam says that it is “far-fetched” to suggest that “the federal registration of a trademark makes the mark government speech,” we find that nearly half of respondents hold this “far-fetched” view. (This does not imply that Tam was wrong—just that the question of whether members of the public perceive federal trademark registration to be government speech is much closer than the Court suggests.)

IP and the Soccer, er, Football

Posted by Michael Risch
Just a short note this winter break week about a short essay that I enjoyed. Mike Madison (Pitt) has put The Football as Intellectual Property Object on SSRN. At first, I was really excited - looking forward to hearing about the pigskin's development from rugby. But, apparently, there's another kind of football around, but the essay was interesting just the same. Here's the abstract:


The histories of technology and culture are filled with innovations that emerged and took root by being shared widely, only to be succeeded by eras of growth framed by intellectual property. The Internet is a modern example. The football, also known as the pelota, ballon, bola, balón, and soccer ball, is another, older, and broader one. The football lies at the core of football. Intersections between the football and intellectual property law are relatively few in number, but the football supplies a focal object through which the great themes of intellectual property have shaped the game: origins; innovation and standardization; and relationships among law and rules, on the one hand, and the organization of society, culture, and the economy, on the other.

The essay details some of the history of soccer and the soccer ball from a variety of IP and innovation standpoints - sponsorships, standardization, unintended consequences of innovation, etc. The discussion provides a nice, brief survey of the untold life of an everyday object. The essay is part of a larger book that I look forward to reading: A History of Intellectual Property in 50 Objects.
Posted at 11:03 AM Labels: innovation, SEPs, trademark

Posted by Michael Risch
UPDATE: I got some new information from the folks at Google, discussed below.

Getting patent data should be easier, but it's not. It is public information, but gathering, organizing, and cleaning it takes time. Combining data sets also takes time. Companies charging a fee do a good job providing different data, but none of them have it all, and some of the best ones can be costly for regular access.

Google has long had patent data, and it has been helpful. Google patents is way easier to use than the USPTO website (though I think their "improvements" have actually made it worse for my purposes, but that's for another day). They also had "bulk" data from the PTO, but those data dumps required work to import into a usable form. I spent 2 days writing a python script that would parse the xml assignment files, but then I had to keep running it to get it updated, as well as pay for storage of the huge database. The PTO Chief Economist has since released (and kept up to date) the same data in Stata format, which is a big help. But it's still not tied to, say, inventor data or litigation data.

So, now, Google is trying to change that. It has announced the Google Patents Public Datasets service on its Cloud Platform and in Google BigQuery. A blog post describing the setup is here and the actual service is here. With the service, you can use SQL search commands to search across multiple databases, including: patent data, assignment data, patent claim data, ptab data, litigation notice data, examiner data, and so forth.

There's good news and bad news with the system. The good news is that it seems to work pretty well. I was able to construct a basic query, though I thought the user interface could be improved with some of the features you see in better DB drag and drop systems (especially where there are so many long database names).

The other good news is that it is apparently expandable. Google will be working with data aggregators to include their data (assuming a membership, I presume), so that you can easily combine from multiple sources at once. Further, there is other data in the system, including Hathi Trust books - so you could, for example, see if inventors have written books, or tie book publishing to inventing over periods of years.

Now, the bad news. First, some of the databases haven't been updated in a while - they are what they were when first released. This leads to second, you are at the mercy of the the PTO and Google. If all is well, then that's great. But if the PTO doesn't update, or Google decides this isn't important any more (any Google Reader fans out there?) then bye-bye.

I look forward to using this as long as I can - it's definitely worth a look.

UPDATE:
Here is what I learned from Google:
1. Beyond data vendors, anyone can upload their own tables to BigQuery and choose who has access. This makes it a great fit for research groups analyzing private data before publication, as well as operating companies and law firms generating reports that combine private portfolio information with paid and public datasets.

2. Each incremental data addition expands the potential queries to be done, and you're no longer limited by what a single vendor can collect and license.

3. The core tables are updated quarterly, so the next update is due out shortly. As Google adds more data vendors, alternatives for the core tables will appear and be interchangeable with different update frequencies.

Nature Versus Nurture in the Propensity to Innovate

Posted by Michael Risch
A colleague pointed me to a paper today that I wanted to share. NBER researchers have managed to tie patent inventor data to tax returns to test scores in order to show who is likely to be an inventor on a patent. The study makes some intuitive and nonintuitive findings. The paper, by Alexander M. Bell (Harvard Econ), Raj Chetty (Stanford Econ), Xavier Jaravel (LSE), Neviana Petkova (U.S. Treasury), and John Van Reenen (MIT Econ), is here:


We characterize the factors that determine who becomes an inventor in America by using de-identified data on 1.2 million inventors from patent records linked to tax records. We establish three sets of results. First, children from high-income (top 1%) families are ten times as likely to become inventors as those from below-median income families. There are similarly large gaps by race and gender. Differences in innate ability, as measured by test scores in early childhood, explain relatively little of these gaps. Second, exposure to innovation during childhood has significant causal effects on children's propensities to become inventors. Growing up in a neighborhood or family with a high innovation rate in a specific technology class leads to a higher probability of patenting in exactly the same technology class. These exposure effects are gender-specific: girls are more likely to become inventors in a particular technology class if they grow up in an area with more female inventors in that technology class. Third, the financial returns to inventions are extremely skewed and highly correlated with their scientific impact, as measured by citations. Consistent with the importance of exposure effects and contrary to standard models of career selection, women and disadvantaged youth are as under-represented among high-impact inventors as they are among inventors as a whole. We develop a simple model of inventors' careers that matches these empirical results. The model implies that increasing exposure to innovation in childhood may have larger impacts on innovation than increasing the financial incentives to innovate, for instance by cutting tax rates. In particular, there are many “lost Einsteins” — individuals who would have had highly impactful inventions had they been exposed to innovation.

The finding that inventors are white males that come from higher income families is hardly surprising, and one might imagine a variety of reasons: access to education, access to capital, risk aversion, discrimination, etc. But the interesting part of this paper, as I discuss below, is that the authors believe they can causally show it is not really any of the usual suspects, at least not directly.