Posted by Lisa Larrimore Ouellette
I've seen a number of recent papers that attempt to algorithmically measure patent scope by counting the number of words in the patent's first claim and comparing to other patents in the same technological field (with longer claims → more details → narrower scope). In their new paper, The Ways We've Been Measuring Patent Scope are Wrong: How to Measure and Draw Causal Inferences with Patent Scope, Jeffrey Kuhn (UNC) and Neil Thompson (MIT Sloan) argue that this measure is superior to prior scope measures.

They validate the word-count measure by comparing with survey responses from seven patent attorneys (below). In comparison, they find that previous measures of patent scope—the number of classes, the number of citations by future patents, and the number of claims—are uncorrelated or negatively correlated with their attorneys' subjective responses. 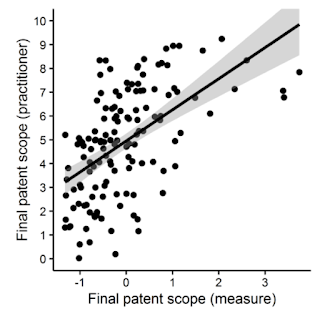 Of course, there are lots of reasons that word count is an imperfect measure, and additional validation would be helpful. (It would also be good to confirm that the attorneys in this study were blinded to the study design.) Those planning empirical patent studies should approach this variable with caution (and with good advice from patent law experts), but it is a potential scope measure that patent empiricists should at least have on their radar screens.
Posted at 4:52 PM Labels: claims, empirics

It is well known that green technologies present a double externality problem. Both innovation and environmentally friendly goods have significant positive spillovers (and thus will be undersupplied absent government intervention), and the problem is magnified for environmentally friendly innovations. The standard policy solution is to correct each externality, such as through carbon taxes (or cap and trade) and innovation subsidies (e.g., patents, grants, and R&D tax incentives).

Liscow and Karpilow argue that this approach misses the dynamics of cumulative innovation. We know that innovators stand on the shoulders of giants, but Innovation Snowballing describes recent research on how innovators "prefer to stand on the tallest shoulders in order to get the quickest, largest financial returns." Specific "clean" technologies (like solar) thus need a big push to snowball past "dirty" technologies (like fossil fuels):

Judge Dyk on the Supreme Court and Patent Law, with Responses

Posted by Lisa Larrimore Ouellette
Judge Timothy Dyk of the Federal Circuit has long welcomed the Supreme Court's involvement in patent law—see, e.g., essays in 2008 and 2014. In a new Chicago-Kent symposium essay, he states that he "continue[s] to believe that Supreme Court review of our patent cases has been critical to the development of patent law and likewise beneficial to our court," such as by "reconciling [Federal Circuit] jurisprudence with jurisprudence in other areas."

Four pieces were published in response to Judge Dyk, and while Michael previously noted Greg Reilly's argument that the Supreme Court does understand patent law, the others are also worth a quick read. Tim Holbrook (Emory) argues that some of the Court's interest reflects "suspicion about the Federal Circuit as an institution" but that the result is "a mixed bags" (with some interventions having "gone off the rails"). Don Dunner (Finnegan) is even more critical of the Supreme Court's involvement, arguing that "it has created uncertainty and a lack of predictability in corporate boardrooms, the very conditions that led to the Federal Circuit's creation." And Paul Gugliuzza (BU) argues that "the Supreme Court's effect on patent law has actually been more limited" because its decisions "have rarely involved the fundamental legal doctrines that directly ensure the inventiveness of patents and regulate their scope" and because its "minimalist approach to opinion writing in patent cases frequently enables the Federal Circuit to ignore the Court's changes to governing doctrine."

Posted by Lisa Larrimore Ouellette
Alan Marco (USPTO Chief Economist) and Richard Miller (USPTO Senior Economist) have recently posted Patent Examination Quality and Litigation: Is There a Link?, which compares the characteristics of litigated patents with various matched controls. The litigation data was from RPX, the patent data was from various USPTO datasets, and the controls were either chosen randomly from the same art unit and grant year or were chosen with propensity score matching based on various observable characteristics. They are interested in whether examination-related variables that can be controlled by the USPTO are related to later litigation, and they conclude that "some examination characteristics predict litigation, but that the bulk of the predictive power in the model comes from filing characteristics."

Marco and Miller report that patents filed by small entities are more than twice as likely to be litigated than those filed by large entities, and patents with longer continuation histories and application pendency are also more likely to be litigated. Government-interest patents and foreign-priority patents are much less likely to be litigated than other similar patents. Other characteristics that indicate higher probability of subsequent litigation include having more independent claims and shorter independent claims (proxies for broader patents), being allowed by examiners with signatory authority, not being allowed on first action, having more IDS filings or examiner interviews.