Posted by Lisa Larrimore Ouellette
Next in my CELS IP recap: Melissa Wasserman (Illinois) presented Is the Time Allocated to Review Patent Applications Inducing Examiners to Grant Invalid Patents?: Evidence from Micro-Level Application Data (coauthored with Michael Frakes at Northwestern). I was delighted to serve as the discussant for this paper, which is the latest in a series of outstanding empirical projects by Frakes & Wasserman on patent examination.

Commentators have raised a lot of concerns about the PTO granting patents that it shouldn’t, which has led to increased scrutiny of the examination process. Prior work by Mark Lemley and Bhaven Sampat has shown that more experienced examiners grant more patents, and they have some results suggesting that this is not just due to selective retention. But I think Lemley & Sampat can’t distinguish between at least three very different stories, which are that more senior examiners grant more patents because (1) they are more out of touch with the latest scientific trends, (2) they are more captured by pro-patent interests, or (3) they just have less time to do their job as well as they would otherwise like. Frakes & Wasserman's new results seem to give us much more confidence that #3 is the correct answer.

They collect rich data on 1.4 million patent applications disposed of between 2002 and 2012, including not only how long the examiner has been at the PTO and technology class but also the examiner's level in the General Schedule scale, which determines how many hours the examiner is allocated per application (with the time per application being roughly halved as the examiner rises in the ranks from GS-7 to GS-14). They confirm Lemley & Sampat's result that more experienced examiners generally grant more patents. But they also find that when you control for the decreased time per application, experienced examiners actually grant fewer patents, which is a really interesting result. And consistent with this story of time-crunched examiners triaging their work, they find that when the time per application decreases, examiners are particularly less likely to make time-intensive obviousness rejections, and that the patents they grant fare less well on various quality metrics. They estimate that if all examiners were given as much time as those examiners with the most generous allocations, the PTO would grant nearly 20% fewer patents per year. 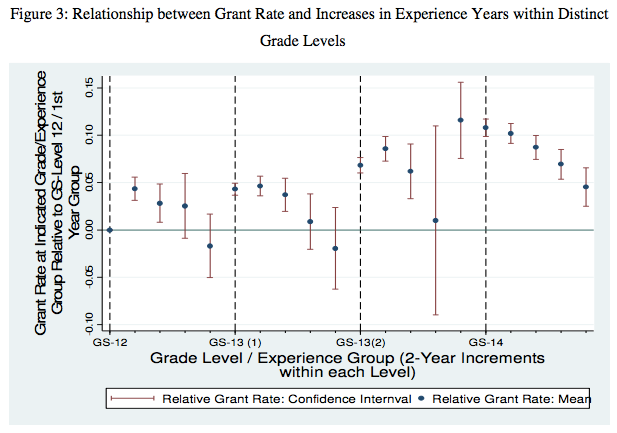 Figure 3 from the paper, shown here, does a nice job of illustrating the basic effect they are measuring. Those interested in all the ways they reached these conclusions should read the paper itself, but I'll note that they've added a number of careful tests. For example, they show that the results are similar for a balanced panel of examiners who experienced each of the promotions they study or when they add various controls (like whether there is an RCE associated with the application). One caveat they can't address is that examiners who are promoted more quickly up the GS scale may be different from those who linger at each GS level, although the grant rate for these quick risers does fall with experience after they reach GS-14.

As the discussant for this paper at CELS, I offered some small technical suggestions that aren't worth repeating here (especially since they may be addressed in the next revision). But overall, I think the project is in great shape, and most readers will likely come away from this paper thinking it more likely that time-crunched examiners are granting more low-quality patents. (I'll bracket the broader question of whether proxies like subsequent citations and renewal rate in fact tell us which are the "good" patents.) So what do these results mean for patent policy more generally?

Even if giving examiners more time would lead to many fewer "bad" patents, that doesn't mean we should necessarily do it: it is important to remember that the optimal number of "bad" patent grants is not zero. In a 1966 article, Edmund Kitch notes that it might not make sense for the PTO to devote more resources to weeding out invalid patents at the examination stage because it is difficult to predict whether the patent will ever be important or the subject of controversy, and Mark Lemley more famously fleshed out this idea in his 2001 Rational Ignorance at the Patent Office. In order to actually know whether we want to invest more resources examining patents on the front end, we need to compare the cost of that increased scrutiny (e.g., higher costs of running to the PTO) with the added benefits we get from it (e.g., fewer litigation costs, less uncertainty for innovators, lower costs for consumers). And for a really full analysis, it would also be helpful to think about the benefits of replacing time-consuming standards with brighter-line rules, and of the benefits that society actually gets from each patent grant even if current substantive rules are precisely followed.

Frakes & Wasserman acknowledge that spending more time in examination is costly, and that a full welfare analysis is “perhaps beyond the scope of the present paper,” where the “perhaps” seems overly optimistic. But it might be possible to at least flesh out the tradeoff in terms of administrative costs, such as by calculating the PTO salary increase necessary to give all examiners as much time as entry-level examiners (which they suggest would lead to 20% fewer patents per year). I'd be curious to see how that number compares with various estimates of the litigation costs of patents, even very roughly.

But overall, this is terrific work, and should certainly be on the reading list of anyone interested in patent examination, patent quality issues, or just agency management more broadly. And I'm looking forward to seeing what emerges next from this duo's collaboration.
Posted at 1:51 PM Labels: admin, empirics, PTO