Posted by Lisa Larrimore Ouellette
My last post on computer-generated IP noted my uncertainty about whether AI is making sufficient contributions to be viewed as a creator or inventor independent of its programmers. The problem is not just factual uncertainty about what any given AI is doing—it is also a theoretical and doctrinal uncertainty about what does or should count as authorship or invention. Shyamkrishna Balganesh addresses this broader problem in Causing Copyright (forthcoming Colum. L. Rev.), which argues that modern copyright doctrine lacks a coherent theory of causation: there is "no viable mechanism by which to examine whether someone is causally responsible for the creation and fixation of the work." This issue is important not just for creative AI, but also for issues like the monkey selfie controversy or simple accidental creation.

Balganesh explains that the requirement that the author caused the creative work is buried in a number of other doctrines. The originality requirements—that the work be independently created and minimally creative—might seem related to authorial causation, though in practice the former is basically a no-copying mandate and the latter focuses on the work itself rather than the act of creation. Joint-works doctrine tests whether each party independently qualifies as an author, which involves some inquiry into authorial causation, although it is not openly addressed as such. And work-for-hire doctrine automatically imputes authorial causation to employers based on having hired workers who executed the project (without the need for independent evidence of causation of specific works). Balganesh argues that rather than having snippets of causation buried in assorted doctrines, "modern copyright jurisprudence would be best served by confronting the question of causation directly through an independent requirement of protection."

What would this copyrightable causation doctrine look like? Balganesh suggests that copyright law should borrow from the separate "cause-in-fact" and "proximate cause" inquiries from tort law. Just as factual causation in tort law looks for human agency behind bad outcomes, the new "creation-in-fact" copyright requirement would look for human agency behind good outcomes. Animals, machines, and divine sources bear no causal responsibility in tort law; similarly, they would not be treated as causally responsible for a creative work. But causing an injury in fact is not sufficient to impose tort liability—proximate causation also demands that liability would serve tort law's goals. Similarly, Balganesh argues that the copyright causation inquiry should have a second step, "legal creation," that "asks whether the identified human agency ought to lead to an authorship claim as a matter of copyright's goals and principles." Of course, as he notes, scholars don't agree on copyright's goals, but he sets forth some midlevel principles of situations in which works that have satisfied the creation-in-fact requirement should nonetheless be denied protection. This figure illustrates the full inquiry: 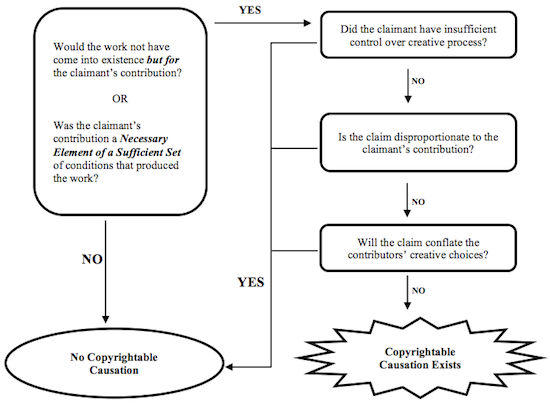 Asking courts to create this new copyrightable causation doctrine might seem like a tall order. But Balganesh is a fierce proponent of common-law rulemaking; see, e.g., this 2010 article or this 2015 book. He argues that "[t]o the extent that the copyright statute—and the Constitution—confirm the centrality of 'authorship' to copyright law, but then leave it up to the courts to ultimately determine the precise contours of that idea, courts should be willing to embrace the law-making role that the system consciously delegates to them."