Posted by Michael Risch
After months of speculation that the FTC's long awaited FTC study on patent assertion entities was going to issue any day now, the study has finally issued. The press release is here, and the full PDF is here.There is a lot to learn from this study - the FTC had subpoena power to obtain data unavailable to mere mortals like the scholars who study this area. I thought that the study was generally balanced and well researched. A scan of the footnotes alone will make a great literature review for anyone new to this area (even if it is missing a couple of my articles...).

Some of the highlights of the study come right out of the press release:


The report found two types of PAEs that use distinctly different business models. One type, referred to in the report as Portfolio PAEs, were strongly capitalized and purchased patents outright. They negotiated broad licenses, covering large patent portfolios, frequently worth more than $1 million. The second, more common, type, referred to in the report as Litigation PAEs, frequently relied on revenue sharing agreements to acquire patents. They overwhelmingly filed infringement lawsuits before securing licenses, which covered a small number of patents and were generally less valuable.

The separation of portfolio versus litigation business models was an important one - something I discuss in Patent Portfolios as Securities and Lemley & Melamed discuss in Missing the Forest for the Trolls.

The study also debunks the notion of widespread demand letter abuse, but does show that PAEs tend to sue first and demand later. It shows about $4B in revenues for all study respondents over a 6 year period, 80% of which came from portfolio companies (and mostly not after litigation). The study is unclear what this $4B represents if extended to all PAEs, but provides some statistics that might aid in a ball park calculation for the whole market.

There's more -- a lot more -- to this report, which runs 150 pages before the appendices. The study concludes with some reasonable and mostly uncontroversial ways the system can be made better, such as limiting expensive discovery at the early stages of a case. That said, I do take issue with one point of the study - relating to nuisance litigation. More on this after the jump.

But it is also consistent with low value patent assertion. Not every patent is worth millions of dollars. Some (most, according to some studies) have a much lower value, especially given the risks of invalidation in any given case even for patents that seem decent on their face. I've long argued that there must be some way for owners of low value patents to obtain some recourse, because otherwise no one will ever license from them.

So, is there any evidence that can help determine if all of the licensing revenue is nuisance? The FTC report does deliver some evidence. It turns out that there is wide variability of licensing revenues on the same patent. Some pay a large amount, and some pay a small amount. The variability is so large, in fact, that the result had to be reported on a logarithmic scale to fit on the page. 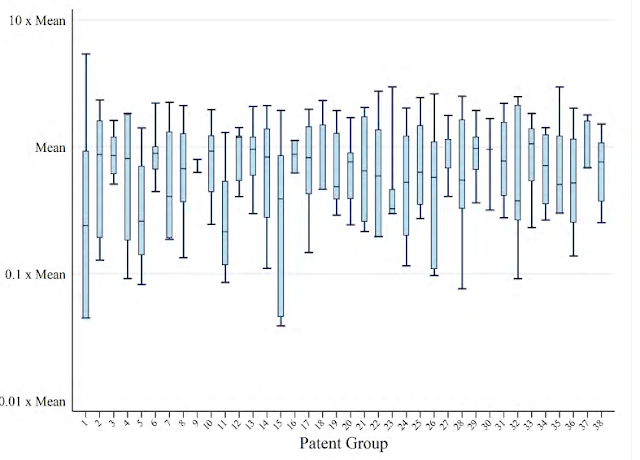 Some of this variation can be explained by early v. late settlements, bargaining power, and other strategic aspects. But another reason, as the study notes, may be the size of the defendant and/or breadth of the alleged infringement. While the settlements are all lump sum, that sum gets bigger for bigger users. Given that defense costs (other than some discovery) do not necessarily fully scale with size --certainly not logarithmically-- this implies that at least some of the variation is unrelated to litigation costs and nuisance.

In other words, while all of this litigation is surely a nuisance to the defendants, I think the study does not unequivocally support the view that this is nuisance litigation, as opposed to simply low value litigation. For some, this will be a distinction without a difference - litigation is bad, end of story. Lee Cheng just can't even with this, and I get that. But for those who are trying to determine whether litigation is a way to generate value for inventors--even low value--I think there is more work to be done.
Posted at 3:20 PM Labels: empirics, licensing, litigation, NPEs