It is well known that green technologies present a double externality problem. Both innovation and environmentally friendly goods have significant positive spillovers (and thus will be undersupplied absent government intervention), and the problem is magnified for environmentally friendly innovations. The standard policy solution is to correct each externality, such as through carbon taxes (or cap and trade) and innovation subsidies (e.g., patents, grants, and R&D tax incentives).

Liscow and Karpilow argue that this approach misses the dynamics of cumulative innovation. We know that innovators stand on the shoulders of giants, but Innovation Snowballing describes recent research on how innovators "prefer to stand on the tallest shoulders in order to get the quickest, largest financial returns." Specific "clean" technologies (like solar) thus need a big push to snowball past "dirty" technologies (like fossil fuels):

Due to society's failure to tax greenhouse gas emission for over a century, the accumulation of dirtytech knowledge has far outpaced that of cleantech. As a result, innovators are in a rut: they gravitate toward dirty technology because it has the largest knowledge stock and therefore promises the quickest profits. But a big push of government support for innovation in clean energy will catapult innovators out of their dirty energy rut and onto a cleantech path that the planet needs to avoid massive climate disruption. 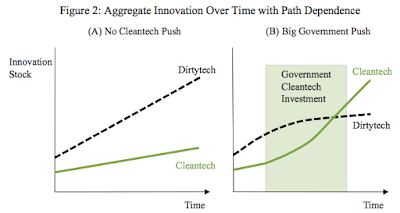 They then discuss the specific policy implications, such as the importance of targeted support like grants over technology-neutral subsidies like patents, and the value of subsidies for late-stage R&D and deployment.

The article is well worth a read for anyone interested in innovation policy, since I think it has implications beyond green technologies. Liscow and Karpilow's key insight is that innovation scholars often miss the importance of path-dependency in innovation policy, and that a hard shove at one discrete point in time can lead to very different outcomes much later on.
Posted at 3:11 PM Labels: green, innovation