They find only a small change in patenting by a country's domestic entities. Foreign entities, however, rapidly switched to filing at the EPO, causing their filings in national offices to drop by over 90%. This figure nicely illustrates the effect: 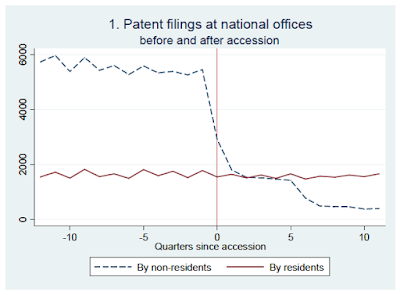 There was not a similar change to FDI: "Despite the clear impact on patent filings, using firm-level data on FDI, we find only very weak evidence that non-residents changed their investment in accession countries following accession to the EPC."

Hall and Helmers argue that these results show "the differential effect of accession to a regional patent system on residents and non-residents of the mostly smaller, less developed accession countries in our sample. Non-residents certainly benefit from the expansion of the regional patent system given their strong reaction, but the net effect on residents is a lot less clear." In other words, joining the EPO creates costs for these countries (because there are more foreign patents, with the resulting deadweight loss) without a strong corresponding gain in domestic innovation or FDI.

In his post yesterday, Michael said it wasn't clear to him why we would have expected stronger IP rights to increase FDI, but this has been one of the main arguments for why developing countries might benefit from joining patent treaties such as TRIPS. For just a few of many articles laying out these arguments—and noting the weak evidence base behind them—see the seminal works by Edith Penrose in 1951 and 1973 or the 1998 Duke symposium articles by Carlos Braga & Carsten Fink and by Keith Maskus.

Studying the impact of changes in patent law through cross-country studies is incredibly difficult (as I have previously explained), but I thought this was a nice empirical design with appropriately nuanced conclusions, and it is certainly worth a download for anyone interested in the impact of the internationalization of the patent system.
Posted at 8:48 PM Labels: empirics, international