Blurred Lines Verdict Affirmed - How Bad is It?

Posted by Michael Risch
The Ninth Circuit ruled on Williams v. Gaye today, the "Blurred Lines" verdict that found infringement and some hefty damages. I've replied to a few of my colleagues' Twitter posts today, so I figured I'd stop harassing them with my viewpoint and just make a brief blog post.

Three years ago this week, I blogged here that:


People have strong feelings about this case. Most people I know think it was wrongly decided. But I think that copyright law would be better served if we examined the evidence to see why it was wrongly decided. Should the court have ruled that the similarities presented by the expert were simply never enough to show infringement? Should we not allow juries to consider the whole composition (note that this usually favors the defendant)? Should we provide more guidance to juries making determinations? Was the wrong evidence admitted (that is, is my view of what the evidence was wrong)?

But what I don't think is helpful for the system is to assume straw evidence - it's easy to attack a decision when the court lets the jury hear something it shouldn't or when the jury ignores the instructions as they sometimes do. I'm not convinced that's what happened here; it's much harder to take the evidence as it is and decide whether we're doing this whole music copyright infringement thing the right way.

To be clear, I'm not saying that's how I would have voted were I on the jury. I wasn't in the courtroom.

So, why are (almost) all my colleagues bent out of shape?

First, there is a definite view that the only thing copied here was a "vibe," and that the scenes a faire and other unprotected expression should have been filtered out. I am a big fan of filtration; I wrote an article on it. I admit to not being an expert on music filtration. But I do know that there was significant expert testimony here that more than a vibe was copied (which was enough to avoid summary judgment), and that once you're over summary judgment, all bets are off on whether the jury will filter out the "proper" way. Perhaps the jury didn't; but that's not what we ask on an appeal. So, the only way you take it from a jury is to say that there was no possible way to credit the plaintiff's expert that more than a vibe was copied. I've yet to see an analysis based on the actual evidence in the case that shows this (though I have seen plenty of folks disagreeing with Plaintiff's expert), though if someone has one, please point me to it and I'll gladly post it here. The court, for its part, is hostile to such "technical" parsing in music cases (in a way that it is not in photography and computer cases). But that's nothing new; the court cites old law for this proposition, so its hostility shouldn't be surprising, even if it is concerning.

Second, the court seems to double down on the "inverse ratio" rule:

This is really bothersome, because just recently, the court said that the inverse ratio rule shouldn't be used to make it easier to prove improper appropriation:


That rule does not help Rentmeester because it assists only in proving copying, not in proving unlawful appropriation, the only element at issue in this case

I suppose that you can read the new case as just ignoring Rentmeester's statement, but I don't think so. First, the inverse ratio rule, for better or worse, is old Ninth Circuit law, which a panel can't simply ignore. Second, it is relevant for the question of probative copying (that is, was there copying at all?), which was disputed in this case, unlike Rentmeester. Third, there is no indication that this rule had any bearing on the jury's verdict. The inverse ratio rule was not part of the instruction that asked the jury to determine unlawful appropriation (and the Defendants did not appear to appeal the inverse ratio instruction), nor was the rule even stated in the terms used by the court at all in the jury instructions: 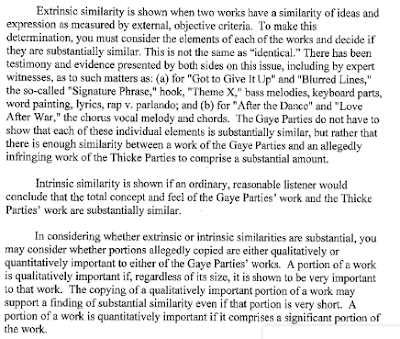 The defendants appealed this instruction, but only on filtration grounds (which were rejected), and not on inverse ratio type grounds.

In short, jury determinations of music copyright is messy business. There's a lot not to like about the Ninth Circuit's intrinsic/extrinsic test (I'm not a big fan, myself). The jury instructions could probably be improved on filtration (there were other filtration instructions, I believe).

But here's where I end up: