There is a lot we don't know about the patent system. USPTO Regional Director Hope Shimabuku started her remarks today by saying that we know IP creates nearly 30 million jobs and adds $6.6 trillion to the U.S. economy each year, citing this USPTO report. But that's not what the report says. It looks at jobs and value from "IP-intensive industries," defined as ones with "IP-count to employment ratio is higher than the average for all industries considered." As the report acknowledges, it is unable to determine how much of these firms' performance is attributable to IP.

And the real answer is: we don't know. In an article I reviewed for Jotwell, economist Heidi Williams recently summarized: "we still have essentially no credible empirical evidence on the seemingly simple question of whether stronger patent rights—either longer patent terms or broader patent rights—encourage research investments." And even on smaller questions, the existing evidence base is weak.

As I explained in Patent Experimentalism, to make empirical progress we need some source of empirical variation. Economists often look for "natural experiments" with variation across time, across jurisdictions, or across similar technologies, and the closer that variation is to random, the easier it is to draw causal inferences. Of course, it's even better to have variation that is actually random, which is why I have joined other scholars in arguing for more use of randomized policy experiments.

The USPTO has a huge opportunity here to both improve the patent system and help address the key administrative law challenge of encouraging accurate and consistent decisions by a decentralized bureaucracy. There are many questions the agency could help answer using more randomization, as I discuss in Patent Experimentalism. During the panel today, I noted two potential areas: experimenting with the time spent examining a given patent (see this great forthcoming article by Michel Frakes and Melissa Wasserman) and with the possibility that examiner bias affects the gender gap in patenting (which fits within the agency's recent mandate from Congress). I noted ways that each could be designed as opt-in progress to encourage buy-in from applicants and from examiners.

But my main point was not that the USPTO should adopt one of these particular experiments—it was that the agency should study something in a way that allows us to draw rigorous inferences. Failing to do so seems like a tremendous missed opportunity. 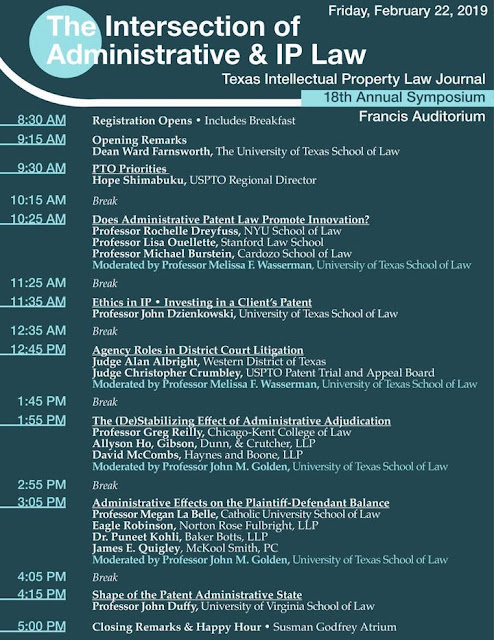