Jiarui Liu on the Dominance and Ambiguity of Transformative Use


This article presents an empirical study based on all reported transformative use decisions in U.S. copyright history through January 1, 2017. Since Judge Leval coined the doctrine of transformative use in 1990, it has been gradually approaching total dominance in fair use jurisprudence, involved in 90% of all fair use decisions in recent years. More importantly, of all the dispositive decisions that upheld transformative use, 94% eventually led to a finding of fair use. The controlling effect is nowhere more evident than in the context of the four-factor test: A finding of transformative use overrides findings of commercial purpose and bad faith under factor one, renders irrelevant the issue of whether the original work is unpublished or creative under factor two, stretches the extent of copying permitted under factor three towards 100% verbatim reproduction, and precludes the evidence on damage to the primary or derivative market under factor four even though there exists a well-functioning market for the use.

This article, albeit being descriptive in nature, does have a normative connotation. Courts welcome transformative use not despite, but due to, its ambiguity, which is a flexible way to implement their intuitive judgments yet maintain the impression of stare decisis. However, the rhetorical harmony conceals the differences between a wide variety of policy concerns in dissimilar cases, invites casual references to precedents from factually unrelated contexts, and substitutes a mechanical exercise of physical or purposive transformation for an in-depth policy analysis that may provide clearer guidance for future cases.

This article builds on and extends prior empirical work in this area, such as Barton Beebe's study of fair use decisions from 1978 to 2005. And it provides a nice mix of interesting new empirical results and normative analysis that illustrates why fair use doctrine is (at least for me) quite challenging to teach. For example, Figure 1 illustrates how transformative use has cannibalized fair use doctrine since the 1994 Campbell v. Acuff-Rose decision endorsed its use: 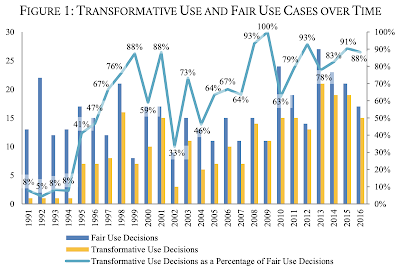 Liu also examines data such as the win rate for transformative use over time, by circuit, and by subject matter. But I particularly like that Liu is not just counting cases, but also arguing that courts are using this doctrine as a substitute for in-depth policy analysis.
Posted at 9:49 AM Labels: copyright, empirics, fair_use